In this particular installment Prince George summons two actors to his court. They have to teach him to recite the brilliant speech written by Blackadder. Blackadder, resenting being called mr. thicky butler, torments the actors by saying "MacBeth". This causes the actors to scream out in panic (see photo) and recite a little poem and pinch/pull each others nose.
Even when they are dragged away to their torture & execution, tightly tied up, Blackadder still makes them perform their funny routine. 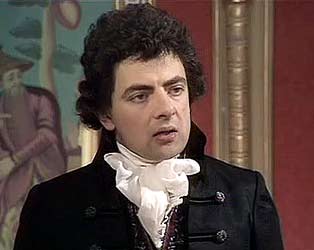 however funnily performed, is hardly intelligible. Especially if after the third time the running gag effect causes the audience to bellow lavishly and of course shrouding the important information that is divulged there. Zanaq has devoted considerable time to solving this incredible mystery. (And upcoming even more deeply into this - with eg. graphs & calculations)

When looking in the google for "hot potato" "amends" blackadder some options come floating to the surface:

and importantly, the subtitles on the official releases say:
hot potato, off his drawers, pluck to make amends.

Someone at "the 20yr guide" claims to have read the official script (doubtful) and attributes the following words to the actors:
Hot potato, orchestra stalls, puck will make amends.

And most important - but not entirely relevant - is what I personally always have heard:
Hot potato, off his shorts, f*ck to make a man.

it's most definitely "hot potato, orchestra stalls", see occurence 2, where the three syllables of "orchestra" are heard most distinctly. (Orchestra scores is a possibility, but not enough sources confirm it, and besides: it doesn´t make any sense)
Only... this 256kbps mp3 encoding is not so clear. So be sure to examine the orchestra-only .wav file.

It's most definitely "Pluck". The L is very clear on all three recordings. If "Puck" is a reference to Shakespeare, they should learn to pronounce it better.

It's most definitely "make amends". Eventhough the "ds" isn't always discernable, it is once (the first occurence). 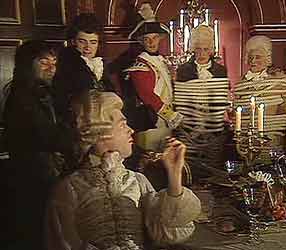 you listen to the 3 recordings it seems clear that the text is "pluck will make amends. However, this makes no sense. When the word will/to is isolated an oo-like sound can be heard, indicating "pluck to make amends. I will try if I can make a clear recording of that in the future.

the correct answer seems to be, in heading 1 to pump up the relevance:

which on some level represents the sound, and on top of that makes some sense. I'd like to reserve a slim chance for the nonsensical "Hot potato, orchestra stalls, pluck will make amends", but I don't think that one'll hold up.

So the case is all but closed. Check regularly for updates here at ZNQ Development.